Are you looking for the best Oahu restaurants? This guide from a Hawaii local has everything you need to know!

Whenever people come to Hawaii, they are always looking for local recommendations.  Secret beaches, blood-pumping hikes, stunning views, and, most commonly, delicious restaurants.  To help with the foodie questions, I’ve created a list of ten categories of the best Oahu restaurants!

Most of the brunch spots in Hawaii simply serve the typical brunch items like eggs benedict, omelets, and French toast. While many of them are delicious, there’s nothing particularly special about them.  But Koko Head Café is definitely different.

Koko Head Café in Kaimuki (just outside of the Honolulu/ Waikiki area) is run by chef Lee Anne Wong, who is an Iron Chef winner, Top Chef contestant, and author of Dumplings All Day Wong.

Due to her ethnic background and travel influences, Wong has created many Asian-inspired brunch dishes, including daily flavors of dumplings (I tried hamburger dumplings once and they were surprisingly good) and the breakfast bibimbap (as pictured at the top; one of my favorites – a Korean dish made of a slightly crunchy rice base topped with an assortment of veggies and meats and an over easy egg).

A crowd-favorite of Koko Head is the cornflake French toast. The crunchy cornflake outside is just a ruse to hide the fluffy sweetbread inside.  To make it even better, the whole thing is topped with two strips of caramelized bacon and a tiny scoop of ice cream.

Hawaii has some of the best seafood in the world. I’ve been so spoiled by Hawaii’s seafood that I’m hesitant to eat it in other parts of the world – even some that are famous for their seafood! (Granted, I usually do anyways, and Hawaii’s seafood always tastes better.)

Nico’s is one of the best places to get some fresh Hawaii seafood – and, as an added bonus, you don’t have to fish all the money out of your pockets to pay for it (check out the prices of Mama’s Fish House on Maui for comparison).  After buying fresh seafood from the fishermen each and every morning, the chefs at Nico’s whip up some tasty dishes like furikake pan seared ahi, fish and chips, and Nico’s steamed clams.  To top it all off, you’ll have a stunning view of the pier as you eat.

Bonus: If you come on a Friday (a.k.a. “Aloha Friday”), you can get a traditional Hawaiian plate with poi, lau lau, kalua pig, and lomi lomi salmon.

Address: Nico’s has two locations, one in Honolulu and one in Kailua. 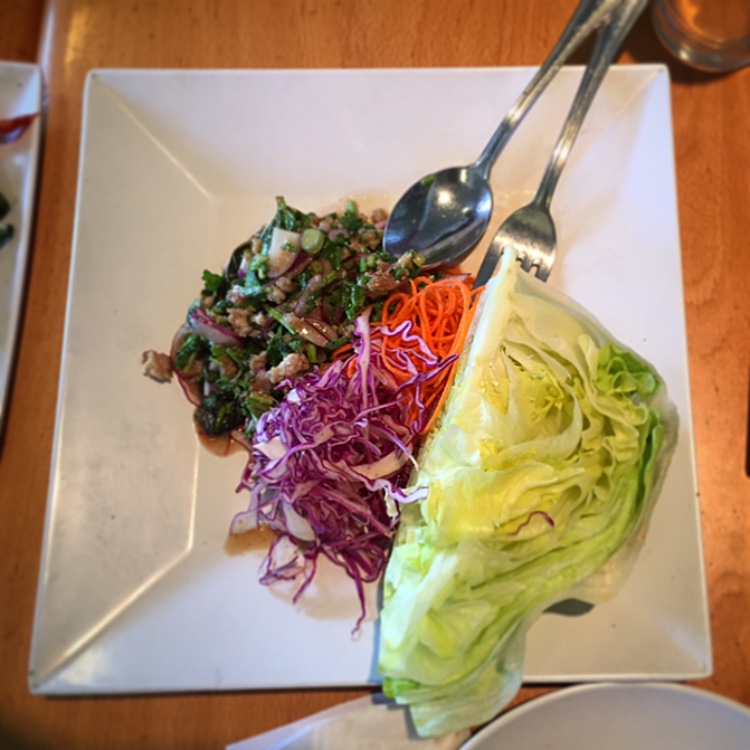 There are literally hundreds of Asian restaurants on Oahu, so picking one is going to spark a lot of debate.  Nevertheless, my pick for the best Asian restaurant on Oahu is Opal Thai.

First of all, I have to preface with the fact that Opal Thai is a unique dining experience.  You’ll walk in and almost immediately, Chef Opel, will rush up to the front to shake your hand to ask you what foods you eat – “shrimp, chicken, duck, pork, beef…” – and what spiciness level you can tolerate.  You’ll be sat at a table after that, and you won’t get a menu, because Opel comes up with a customized set of dishes for your table (oh, all of the dishes are family style by the way).

Sometimes Opel will tell you what the dishes are, and sometimes he won’t.  I’m pretty sure that’s intentional, because he does have a secret dish that he serves to all first-timers that isn’t even on his not-used menu (trust me, it’s delicious).  I’ve been to Opal Thai a few times now, and I can say that there wasn’t a single item on his menu that I didn’t like.  The tangy lime, herby cilantro, and spicy Thai chilis (as per my spiciness level) radiated throughout every dish – from the tom yum soup to the sautéed eggplant and sting beans to the drunken noodles.

I’ll admit it.  Hawaii is pretty lacking on stunning European food overall, but the Greek Marina has become one of my favorites.  This casual, marina-side restaurant serves up the most delicious gyros I’ve ever had.  (To put it in perspective, I was quite disappointed by the fry-filled gyros I had in Greece in comparison.)

But the fluffy pita bread, well-seasoned shawarma, and creamy tzatziki sauce at the Greek Marina are perfect.  Their appetizer platters and desserts (particularly the basboosa and baklava – if you don’t know what either of these are, refer to this post, as Greek and Egyptian food overlap quite a bit) are also worth a taste.

I know, this is a weird category.  But Monkeypod Kitchen had to be on this list, so I had to make a spot for it.  As I mentioned in the Ultimate Guide to Ko Olina and the Ko Olina restaurants article, Monkeypod is one of my favorite Oahu restaurants.

I usually go during their happy hour (3-5:30 p.m. and 9-11 p.m.), because all pizzas and appetizers are half-off!  Their kiawe-wood oven pizzas, pumpkin patch ravioli, and Kauai shrimp and hamakua mushroom potstickers are some of the best dishes I’ve ever eaten anywhere.  Honestly, I’ve never been disappointed by the food at Monkeypod.

*Note: If you choose to visit Monkeypod Kitchen outside of happy hour times, the price can be a bit expensive.

Giovanni’s Shrimp Truck has made a name for itself, serving up the island’s most delicious garlic shrimp from its two trucks on the North Shore (the original one in Kahuku, and the other in Haleiwa).  While they do serve a couple of other items, they basically just churn out their delicious garlic shrimp for their loyal customers.  (And the occasional extra spicy shrimp platter for those dense enough to ignore their several warning signs.)

Address: Giovanni’s has two shrimp trucks, one in Haleiwa and one in Kahuku.

Looking to have a formal dinner?  Roy’s is the best Oahu restaurant for you!  This local restaurant chain is run by famed Hawaii-grown chef Roy Yamaguchi.  With dishes like misoyaki marinated butterfish, chicken picatta, and charred honey mustard beef short rib, you’re sure to have some fantastic food.  Please note that this Oahu restaurant also comes with a pretty price tag).

Tip: If the chocolate soufflé is available at the location you choose to visit, get it.

Address: There are a few Roy’s locations across Oahu, including in Ko Olina, Hawaii Kai, and Waikiki.  There are also several locations on the other islands and in the continental United States.

Kahuku Farms has popped up in a handful of my posts, including the Ultimate Guide to the North Shore and the best North Shore restaurants, particularly for its acai bowl.

But Kahuku Farms has so many more delicious dishes other than that fruity treat.  Farm-fresh smoothies, salads, sandwiches, and ice cream are all also on the menu.  Oh, and if you’re looking to buy some fresh local fruit, including papayas, mangoes, apple bananas, and guavas, at an amazing price, Kahuku Farms has got you covered.

Bonus: There are farm tours at Kahuku Farms too, if you really want to see where exactly your food came from.

I’ve also written about Pipeline Bake Shop & Creamery on many occasions now, most prominently in my “Where to Get the Best Malasadas on Oahu” post.  While whether or not they have the best malasada on the island (in comparison to Leonard’s Bakery) is still up for debate, Pipeline has an assortment of delicious desserts in addition to the malasadas.

Besides a slew of ice cream flavors, their “cake bombs” are well, the bomb.  I’m actually very picky with my desserts, and I’m usually quite disappointed when I visit bakeries.  But the cake bombs, which are like mini bundt cakes, are delicious!  My favorite is the lemon cake bomb, but the POG (passion orange guava) one is also quite good.

Just as a note on the cake bombs, the ones with flavor in the actual cake part (not just the frosting part on top) are much better.  In other words, don’t fool yourself by getting a “chocolate” cake bomb that’s actually vanilla cake with a chocolate syrup.

The Pig & The Lady (and it’s spin off, Piggy Smalls)

If you’re still looking for Hawaii foodie inspiration, check out Part 1 and Part 2 of the Hawaii Food Bucket List!

What is your favorite place to eat on Oahu?  Are there any other Oahu restaurants do you think should be on this list?  Let me know in the comments!  (I promise I’ll respond!)

Did you enjoy this read on Oahu restaurants? Pin it for later!

82 Replies to “The Best Oahu Restaurants”