The Makapuu Lighthouse trail is one of the easiest hikes on the island of Oahu, Hawaii. People conquer this paved path all the time with their children, grandparents, and pets – that’s how doable it is! Plus, at the end, you get quite the stunning view of the southeastern part of Oahu, including the historic Makapuu Lighthouse.

What Is Makapuu Lighthouse?

Makapuu Lighthouse was built in 1909 – fifty years before Hawaii was even a state! In its early years, it was very important, as it helped many navigators reach the island of Oahu. It was actually so vital that Makapuu Lighthouse was added to the National Registry of Historic Places in 1977.

As with many places in the Hawaiian Islands, there is a legend as well. According to this Native Hawaiian legend, Makapuu was once home to an islander goddess with shining eyes. Pretty cool coincidence that it’s now the home of a shining lighthouse, isn’t it?

Where Is the Makapuu Lighthouse Trail?

The Makapuu Lighthouse Trail is located on the southeastern tip of the island of Oahu, Hawaii. There is a designated parking area for the trail. While it’ll likely be packed when you get there, if you slowly drive through the lot, someone will probably be getting out just as you need to pull in.

How Can I Get to the Makapuu Lighthouse Trail?

The only reasonable way to get to the Makapuu Lighthouse Trail is by car. Unfortunately, the closest bus stop to the trailhead is about a mile away. While that’s not an unreasonable distance to walk, the walk is also along a curvy road near the water with tons of blind spots and no pedestrian walkway. Long story short, don’t try walking from the bus stop to the Makapuu Lighthouse trail. 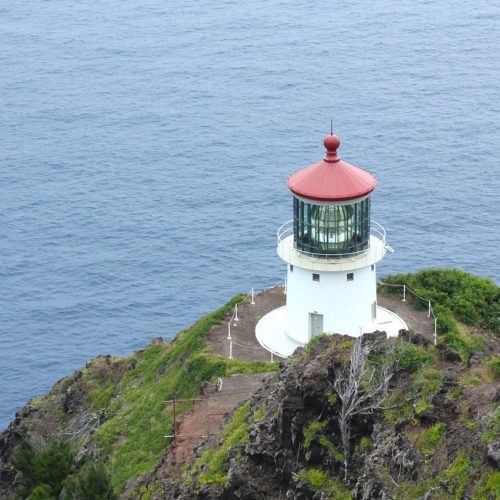 When Is the Best Time to Hike the Makapuu Lighthouse Trail?

In my opinion, the best time to do any hike is in the morning. That’s when the temperature is nice and cool, and most people haven’t gotten up yet. If you are an exceptionally early riser, this trail is one of the best sunrise hikes on the island.

What Should I Bring to Hike the Makapuu Lighthouse Trail?

Even though the Makapuu Lighthouse trail is a relatively easy one, that doesn’t mean you shouldn’t bring water with you! Water is so vital to keeping your body at its peak during a hike. So bring some with you in an environmentally-friendly reusable water bottle.

If you are someone that burns quite easily, you might want some sunscreen for this hike, as there is minimal shade. While you’re at it, use some reef-safe sunscreen, such as Steam2Sea, Raw Elements, and Kokua Sun Care Hawaii.

While this hike is doable in slippers (a.k.a. flip-flops – check out more of the local lingo, if you’re interested), it’s easier to do in athletic shoes. As always, I recommend Fila’s Women Hiking Shoes. (There’s a men’s version as well.)

As mentioned in the introduction, the two-mile round-trip Makapuu Lighthouse trail is one of the easiest hikes on the island of Oahu – if not THE easiest one. That means your children, grandparents, and dogs will all be able to tackle this trail. The entire path is paved too, so you won’t have to worry about getting stuck in mud or tripping over rocks. Give yourself one to two hours (depending on how long you want to spend at the top) for this hike.

That said, there are some parts with steep inclines. But if you pause and take a break (which is totally acceptable), there should be a nice sea breeze to cool you down. I should also note that there are parts of the hike that drop down a cliff if you do not stay on the path, so just keep an eye out for your kids.

If you come during the winter months, you may get the extra bonus of seeing whales on your hike up the Makapuu Lighthouse trail! As a matter of fact, this may be one of the most popular places for whale spotting on Oahu. The easiest way to see the whales is by spotting their spurts of water! (They kind of look like the steam from a kettle shooting straight up for a second.)

On the way up to the Makapuu Lighthouse, there is also access to the famed yet elusive Makapuu tide pools. If you do plan on checking out the Makapuu tide pools, please check the tide before you go! If the tide is high when you visit, it can be quite dangerous, as the waves can easily crash into the pools and sweep you out to sea.

What Do I See from the Top of the Makapuu Lighthouse Trail?

The view from the end of the Makapuu Lighthouse trail is absolutely stunning. As a matter of fact, considering how little effort needs to be put in (as compared to the other Oahu hikes of course), it’s one of the best views on the island!

In addition to the aforementioned whales in the winter months, you’ll get an unobstructed view of the vast Pacific Ocean. You’ll also see two little islands: Rabbit Island and Kaohikaipu Island State Seabird Sanctuary. In addition, if you look to the left, you’ll be able to catch a glimpse of the stunning green hills on the eastern side of Oahu, along with Makapuu Beach Park. Lastly, if you look directly below you when you are at the top, you will also see the famed Makapuu Lighthouse.

Interested in adding another hike to your list of things to do on Oahu? Here are fifteen of my favorites!

Have you ever hiked the Makapuu Lighthouse trail? Tell me about your experience in the comments! (I promise I’ll respond!)

Thinking about adding this hike to your list of things to do on your Oahu vacation? Pin it for later!

The Hikers Guide to Oahu

The Hikers Guide to the Hawaiian Islands

Disclosure: I use referral links in this post, and I might make a commission on my recommendations.