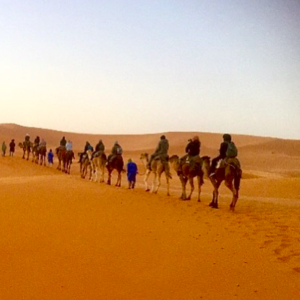 It was time for me to take on my third continent of the year: Africa.  We were off to a country that was a blend of languages, foods, and cultures.  We were off to Morocco!  But little did we know, we were about to experience a Moroccan sandstorm – but literally and metaphorically.

Morocco is a land of three primary cultures: Berber, Arab, and French.  The Berbers were the indigenous people of the land known as modern-day Morocco; however, their influence is less prevalent in the country today.  The Berber language is only written on signs for government buildings, schools, and hospitals.  The average shop will only have writing in Arabic and French – nothing in Berber.  This is because in 702, the Arabs invaded Morocco, bringing their culture, including the Arabic language and the Islamic religion, with them. They continued to be in power for the next several hundred years, until the early 20th century, when France made Morocco a French protectorate.  While French rule only lasted until 1956, when the Moroccans were able to gain their independence, their influence still remains sixty years later, as the French language is still widely spoken.

We spent six days in this crazy mixing pot of cultures known as Morocco.  But BY FAR my favorite day was the day in the desert.

Our bus dropped us off in a small city, where we piled into 4x4s and raced through the Sahara Desert…during a Moroccan sandstorm.  It was rough.  I could only see one or two of the other cars in our caravan through the billowing clouds of orange sand, and when we tried to open the window – well, that was just a bad idea.  I have no idea how our drivers knew where they were going, but, by some miracle, all fifteen or so cars arrived at a two-story sand-colored building in the middle of the desert.

We drank some mint tea, ate some couscous, and danced to some Moroccan music before heading out to our tents.  Yup, we were camping out in tents made from thin red and green Moroccan sheets in the middle of a sandstorm in the Sahara Desert.  It was a struggle.  We positioned ourselves so that way the sand that was blowing in through the door flap wouldn’t slap us in the face while we were sleeping.  It was a semi-successful venture.  Besides the sand, there was the cold.  At night, the desert became extremely cold.  Even though I was wearing three layers and had a blanket, I was still FREEZING.

Needless to say, all of us were awake at ridiculously early hour.  So what was our plan?  We mounted on some camels and headed out into the desert.  Just as the sun started to rise over the sand dunes, we, in our caravan of 70 camels, adventured into the Sahara Desert.

After reaching a peak, we dismounted our camels, laid down our patterned scarves, and sat to watch the Saharan sunrise.  The golden rays highlighted the vast expense of orange sand all around us.  In every direction we looked, there was no sign of civilization (besides our little two-story building in the distance).  It was surreal.  It was just the blue sky, the orange sand, and us.