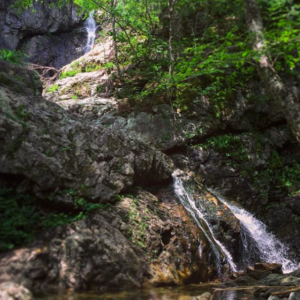 In all honesty, it was more of a walk than a hike. My brother and I just kept staring at the leaves of the trees to see if we could get maple out of the trunks or picking the berries on the bushes and trying to decide if we could eat them, even though we have no experience deciding what wild plants are edible and not edible. In the end, we decided against ingesting any of the mysterious Nova Scotian flora.

But that didn’t stop nature from injuring us.

About halfway to the falls, I look over and my brother’s neck is covered in blood. I tell him and he moves his hand to his neck. As he pulls it away, his hand is covered in the red sticky substance. And the weird part? He didn’t even know it. Whatever happened, he didn’t feel it.

He looks over at me in shock and realizes one side of my neck is bloody too. We decide it’s too much of a coincidence. There must be a vicious creature lurking in the forest, ready to pounce on the necks of unassuming humans.

We get to the falls, and we decide to avoid washing our necks (who knows what other dangerous creatures and bacteria lurk in the forests of Cape Breton Island?), and, instead, just watch the water flowing down the rocks.

Fifteen minutes later, we trek back towards the bus, and, just as we are about to get to the clearing, I feel something land on the other side of my neck. It’s barely even noticeable. I swipe it away, but not before it manages to bite me again. It tears away a small chunk of my flesh, and, once again, the blood from my jugular starts to flow out.

The four of us hurry onto the bus, but not before another in our group is bitten. Out of the four of us, three of us were bitten. But I had taken the hit twice. Four people. Four bites.

I pour some water onto a tissue and try to clean off all of the blood. I end up needing a second tissue.

When our guide returns to the bus, we ask what could have bitten us, and, even though he’s a local, he has no idea.

The conclusion: We were bitten by vampires.

All of the events in this story were true, except for one tiny detail: we were not bitten by vampires. After a quick internet search, I found out we had been bitten by female black flies, which bite behind the ear, on the neck, in order to get blood to nourish their eggs. They are quite common on Cape Breton Island, as well as in a good chunk of Eastern Canada.  To avoid their bites, use fly repellent, and then head on your adventures wherever they may take you.